Posted by sidsfishingadventures on December 26, 2017
Posted in: uncaterogised. Leave a comment

The Wels catfish, also called sheatfish, is a large catfish found in wide areas of Central, southern, and Eastern Europe, and near the Baltic and Caspian Seas. It is found from the United Kingdom all the way east to Kazakhstan and south to Greece. They feel like a conger eel and there mouth is like a bucket. Their eyes a quite small but there hearing and their vibration senses are off the charts. I have watched YouTube where they are hunting pigeons in a few inches of water.  They can grow to lengths of 4 m (13 ft) and a maximum weight of over 180 kg (400 lb) it is the third largest freshwater fish in the world. The river Ebro is Spain’s longest river rising approximately 50 miles from the Atlantic to the South of Santander in the Cantabrian Mountains. It flows approximately 395 miles along the southern foothills of the Pyrenees in Northern Spain before emerging at a large delta some 100 miles south of Barcelona, into the Mediterranean Sea. The larger Catfish are found above the hydro-electric facility at Mequinensa. This is where the catfish were originally introduced just over 35 years ago by a German scientist. The Ebro is joined at Mequinensa by two major tributaries, the Cinca and the Segre, and this is a renowned, heavily fished area of the river systems. The catfish population quickly worked its way downstream to the extent that they now thrive all the way down to the delta. At this stage the catfish of the Lower Ebro are slightly smaller than at Mequinensa, since these fish are of a younger generation. The biggest recorded specimens so far have topped the 180lb, which means that a 200lb fish is a definite possibility within the next few years. 100lb fish are common, at the moment approximately 1 in every 5 fish caught is in the 100lb category. The extremely rare albino catfish is also present with the chance of landing 1 out of every 2000 specimens each season. The growth potential for the catfish in the lower river is phenomenal due to the roach, carp and the vast shoals of mullet which migrate up stream from the Mediterranean. There are a lot of different Wels cat fish guides to choose from, some will have bank fishing others will bring you boat fishing it works out cheaper when you go in groups of three especially when you are fishing off a boat. The reason I went to Spain for wels is when I was fishing for carp in France I hooked a fish that ran me ragged up ,down and across the lake I was fighting it over 30 minutes before I could see it was a wels cat fish. It weight in at 45lb, I must admit it felt a lot larger than that. When I got back to Ireland I searched the net for cat fish holidays and found lots to choose from, I went with Catmaster Tours that were an English company working out of Mequinensa. Since then I believe that they are no longer operation but don’t worry there still lots to choose from.

My fishing holiday in Spain a good few years ago 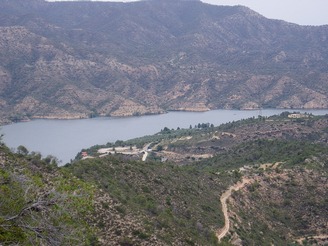 looking at a tiny part of the Ebro

As my missus likes a bit of fishing it became a family holiday to remember. As we got off the plane we were met by our guide John, we were then driven to our apartment that was first class. After unpacking our bags he brought us for a tour of the town showed us the local swimming pool restaurants, pub and were he was bringing us fishing. With the tour done we sampled some of the local food in an English run restaurant that was lovely. With the belly’s full it was time to go to bed as it was a 5am start .When you are fishing for wels the rule in Spain is first light to 12 at night if you are caught out side them times the local cops will take all your fishing gear and if you don’t have the right license they will do the same. If you stick to the rules everything will be ok if not you will pay the price. That night I could not sleep with the anticipation of the size of fish that was swimming in the river in front of the apartment. 5am was here and the Mini bus was at the door, we were on our way to Mequinensa most famous swim the pump house. With our rods and bait set up by our guide John all we hade to do is hold the rod as john rowed out the bait. With all rods set up and in their upright stands all was left was the fish to start feeding. As we were waiting john was going through the baits we will be using and how they will be set up for the week. He said we will start with the large 25mm trout pellets, how we will fish them is, we will put seven 25mm pellets on a hair with a size 6/0 circle hook, our trace will be 300lb kite line added to a 250lb swivel our lead weighs a pound to keep a tight line to our rods the lead is then added to a sliding boom and our main line is 100lb braid. The next bait will be a live bait a carp around 3lb to 5lb when we use them a light line of about 25lb will be tied off the tree across the river on the island to the swivel above the carp, then with the rod in the stand I will tighten the main line until the carp is only a few feet under the water. He then said you will hear the line brake as the cat takes the carp. It only took two hours for our first take it was a small cat of 85lb

With the fish returned we could see small fish scattering over our baited spots, John said it won’t be long before we get another cat. We landed four more around the same weight, and as we were taking turns Mandy’s rod started to go. She lifted the rod into the fish and it started to run down river, she faced the rod towards the fish and put her thumb on the reel to put more pressure on the rod, it worked the fish started to head back to where it was hooked. After 25minuts the cat was on our side of the river and our guide John put on the gloves and got into the water waiting for the 300lb trace to appear. As the trace came up he grabbed it and put his hand into it mouth were he can safely hold it. He slid the Wels onto a plastic sheet at the side of the bank, with the fished weighed at 128lb I could see Mandy smiling.

The next few days we were landing fish between 75lb and 110lb it hard to believe that these fish are only in this river system around 35 years and nearly every fish was over 80lb. Day four was a day to remember it started with a hard fighting albino wels cat it was the luck of the draw that it was my turn to take the live bait set up and as John said I could hear the 25 lb line crack on the far side of the river with the fish in the sling it brought the needle of the scales to 146lb what a mad looking fish.

my first trip to Spain and the odds were in my favor with this 146lb albino Wels cat fish caught at the famous pump house swim on the Segre River that flows into the Ebro.

I was like a child after landing that fish and I did not believe that the fishing was going to be so good. The next day we decided to go site seeing and take a look at the massive dams, as you might guess I still brought a small spinning rod that I got off John just in case I saw some bass.

My first and only big mouth bass, its well worth going site seeing

One of the huge hydro dams in Spain

With a relaxing day over it was time to get back to them hard fighting fish. As it was the last day we decided to put out the full arsenal that John had at his disposal

With two live bait cat rod’s two trout pellets cat rods and two carp rods out we were ready for action and action we got the carp rods were going off every 30 minutes wit most of the carp in the 20lb bracket all caught on single 25mm pellets these fish are long and are designed to fight hard.

This 26lb river carp was a hard fighting fish

We decided to pick our rods for the last session in stead of taking turns. Of course Mandy picked the rods that were going off. She said her arms were getting tired as she smiled then her rod went off again. This time we knew it was a big fish it was taking line off the reel with ease and was going were ever it liked. John locked the reel as much as he could and Mandy put her thumb on the reel, it made very little difference to what the fish wanted to do. It was down to who was going to tier first and knowing Mandy it was not going to be her. After 45 minutes Mandy started to win the battle and like before John was waiting in the water for the right moment to grab the line. With the fish on the bank and its length measured at 7ft 11in it was time to weigh the monster. It took two of us to lift this 156lb cat what a fish. 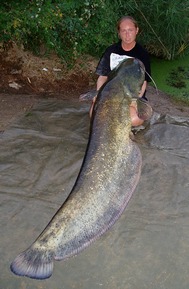 Mandy in the water with her PB Wels cat fish 156lb

After that fish Mandy said to me all the rods are yours I have enough. It was like the fish new that Mandy wasn’t fishing because it got quite. As we were going over what fish we caught that week my rod sprung into action it was fighting like Mandy’s fish with long powerful runs. My heart was beating fast and I was praying I would not loose it as john got his hand into the fish’s mouth the hook came out, how luck was that john said. It weight slightly heaver at 160lb and was the same length, what a fishing holiday. I will go back in the very near future for more of them river monsters.

My PB 160LB Wels cat fish caught on the last day of the holiday.

Wels cat fishing is for every type of angler young and old, it is one fish you will remember and talk about when you are fishing with the lads at home.

I have a short video clip in my videos