Posted by sidsfishingadventures on July 18, 2015
Posted in: Sea Angling. Leave a comment

Thick-lipped mullet are the largest of the mullet species. There mouth consists of a fat top lip and a thin v shape bottom lip. They normally feed on the bottom by sucking sand into there mouth and discarding what they cannot eat out through there gills. You will see them around sewage pipes picking through the waste and eating the green algae off the rocks. Ticked lipped Mullet to me are in many ways like carp, they graze on algae eat crustaceans and feed off the bottom and off the surface and both like bread and are easily spooked by shadows and fast movement. They both fight hard in the summer months on light gear. There colour and shape are like bass, with spines on there back but have a lot smaller mouth. There found up most tidal systems up onto fresh water right through the warmer months. Sometimes, they will have gold cheeks and can be confused with a golden grey mullet. They are a very slow growing fish and have little protection from being over fished and are mostly used as lobster pot baits. Reports Over the past few years has revealed that over 600 ton of mullet has been taking from the south of Ireland. I believe it is far more than that because the price of a box of mullet is rising to €40 and there is no limit to how much they can take. I recently seen a nets man taking over 35 boxes of mullet from a small estuary were I fish. With the increasing numbers of boats targeting them for the fish market, it would only take a short period before our Irish stocks are gone. The Irish record is 4.128kg caught in cork harbour in 1993 and the specimen weight is 5lb the British record is just over 14lb 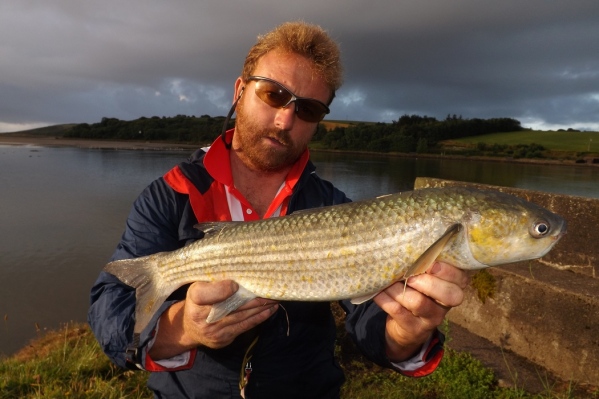 A tick lipped mullet with gold spots can easily be mistaken as a golden grey mullet.

My first experience Mullet fishing
A long long time a go when I started fishing for mullet with my good friend Tony Cotter, it was with bits of fish on a key wall beside a fish co- op in youghal. Every day the co-op staff dump their fish waste into the sea and as it was sinking small shoals of large mullet would pick at it and seemed not to care if anyone was watching. As a boy, I was amazed that no one was fishing for these huge fish. I decided to ask the local nets men what type of fish were they and were they eatable and his reply was mullet, them fitly horrible things who want to catch or eat them [I wonder would he say that today]. The Next day we arrived with our beach casters big reels 15lb line and size 2/o hooks. We sat on the pier weighting for the fishmonger to dump the scraps and like clockwork, the waist fish were sinking to the bottom like the day before. As the mullet moved in we dropped our fish baited big hooks in and as they were sinking, mine was swallowed. I lifted my overweight rod and I was in, the mullet took off like a bullet. As I was young and light it nearly pulled me clean off the pier wall but with the crack, of the line, it was off and I was still on dry land. I never felt a fish as strong as that. Just like that, all the mullet were gone and the only thing feeding on the waste was crabs. It was the next day before they came back and you could see that they were nervous and kept away from our 15lb line and 2/o hooks [I wonder why]. Over the next few years any thing that I could read about mullet I did and they all came to the same conclusion there are impossible to catch, and I was starting to believe it.
It was two to three years after that day I noticed a lot of mullet in the river lee in cork city taking bread off the surface. I was wondering where the bread was coming from; I walked up along the river and there was an elderly woman with bags of bread feeding swans. I sat there until all the bread was gone. I was amazed of how many mullet were there, and all of them were competing with the swans for the bread. The longer I sat there the easier it looked to catch them. I was only 14 that year but I had learned how to catch large weary carp off the top on light line and small hooks with pieces of bread from the Lough in cork.
I new I had every thing that I needed at home and decided to come back the following day with my nephew Kenneth. When we arrived, we seen the elderly women feeding the birds. I said to Kenneth she prebaiting again and he started to laugh. As we passed her there was mullet as far as you could see waiting for bread, we decided to go down to the end of the shoal to pick off the stragglers and then work or way up. With six-pound line small hooks, bubble float and a loaf of bread we were ready to give it a cast. The mullet came up so fast for the bread there were nearly choking on it. We were hitting fish after fish until I hit a large one that ran right up through the shoal. After landing it we could see the rest of the mullet got weary, there were nibbling the bread and some how were able to take it off the hook, but as the bread was sinking they swallowed it again. Therefore, we decided to sink our bread instead of floating. I hoped it would trick them, and boy did it, any fish that went for the bread engulfed it. Lucky enough every mullet we hooked ran down river and away from the rest of the shoal. We had about another 10 mullet before we decided to look for the larger ones that were swimming in among the shoal. The first large fish I casted to took it, It is unbelievable the difference in power between a four and six pound mullet. Back then, you had to send the bodies off to claim a specimen but as I do not like killing fish, I decided to return it instead. I learnt a few things that day, first; when fishing for mullet look for tidal areas were people are feeding birds; two don’t fish at the head of the shoal you will spook every fish; third if the mullet are picking at the bread on the surface try sinking it and most of all they can be caught. 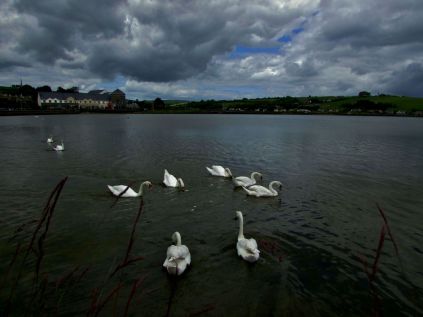 Now days anywhere I see swans near the sea I will stop the jeep and have a quick look to see is there any mullet and if there is there is a chance, they have tasted bread. 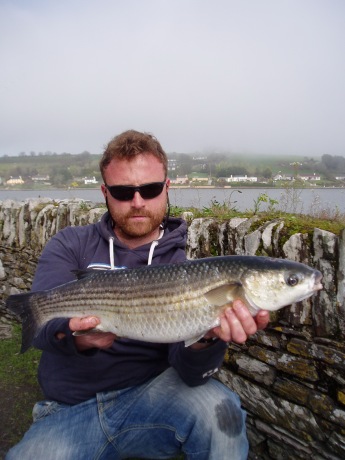 This 6lb 5oz mullet was caught in the lagoon side of Ross Carbery, well worth looking at

Ross carbery in the summer months has to be the hot spot for most mullet anglers because nearly every time I arrive, there are lads from all over the country fishing. I normally fish for mullet with a carp 60g controller float with nine to twelve pound fluorocarbon on a one and three quarters test rod with a reel loaded with braid with a size 10 hooks with some very good results. I changed the strength of my fluorocarbon down to 6lb Last year when I fished for mullet in Ross carbery county cork and the fishing was super, it was as if I could do no wrong with the mullet taking the bread on the first cast 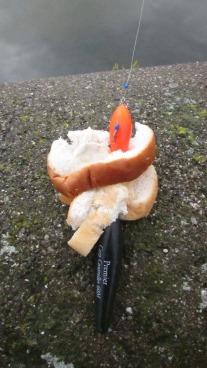 how to get free bread offerings to where you are casting first take off your hook link then mould bread around your float and after casting wait for a moment then pull to release the bread
I was hitting mullet after mullet and after every three to four fish; I would put out more free offerings and when I thought the fish were competing I would start fishing again. I felt like I walked for mile moving every were the mullet did but it was well worth every step. All the mullet were fighting hard, they all did long runs as well as jumping and twisting trying to break the line or shake the hook free. After every fish, I would check my line for ruff marks and after a few fish, I would retire a new trace. That day I landed four over specimen weight with a total of 27 mullet, the smallest was weighed in at 4lb 4oz and the largest 6lb 2oz total weight was 114lb 6oz it was a cracking mullet session.

When claiming a specimen you must zero your sling on the scales because the sling could weigh several oz. then you must take photos of head, chin and then the length on IFI measuring mat. you can purchase  these mats form  http://shop.fishinginireland.info/index.php?main_page=index&cPath=45 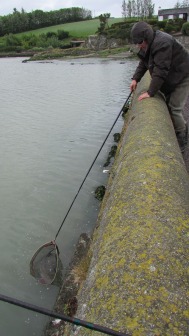 Half way through that day Dan arrived with his daughter Sarah and my son Derick, between them they had two of the heavier floats that was able to cast out to the furthest fish. And like me, they had mullet interested in taking the bread. fishing for mullet at close range it is quite easy to see your bread [30 yards] but at long rang [60yards] it a guessing game, when you see a swirl, you are thinking is the bread in its mouth or not. The best thing is to watch the bright red carp controller float and if it slides or moves the opposite way it is drifting hit it, there is a good chance it is in it mouth. In the short time Dan, Sarah and Derick fished, they managed to land over sixteen mullet with Sarah getting her first ever specimen and Derick landing his first specimen mullet of the year.

The good days when stocks were healthy Derick with a 5lb, Sarah with a 5lb 8oz and myself with a 6lb 2oz mullet all landed with in twenty-five minutes of each other 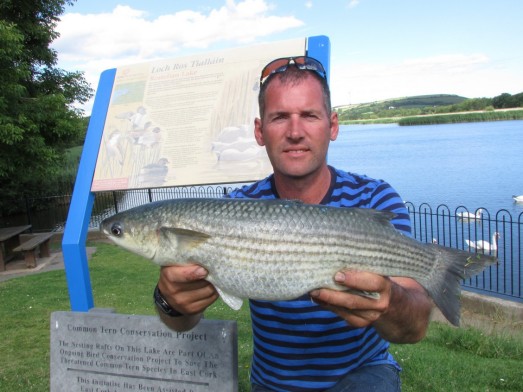 Dan with a 5lb 8oz east cork mullet
2015
This year I have noticed a massive drop in mullet numbers, it has to be down to the amount of mullet caught by the herring, nets and trawler boats. It was reported that 600 tons were taking from the south of Ireland and you can be sure it was a lot more. As there is no tonnage on mullet nearly every boat now are hunting for them. The stocks have plummet around cork. Ross Carbery at this time of year should have thousands of fish but instead has only a hand full. If our government do not protected them NOW we will lose our entire fish stock. I have put in a lot of time this year that only produced a few fish compared to this time last year I had over a 120 mullet. I have being told it the weather, and nothing to do with the countless thousands of mullet being taking, some people do live in a different reality to the rest of us 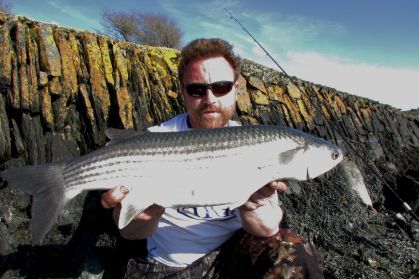