Posted by sidsfishingadventures on October 11, 2014
Posted in: Shore Angling. Leave a comment

Printed in Irish angler,s Digest in September
The Undulate Ray is found in Southern Ireland especially in Tralee Bay Fenit it is found in areas of sand and mud during the summer months. Their eggs are known as mermaid’s purse or devils purse. The Undulate ray features a disk-shaped head with small thorns for protection. The dorsal fins are far apart, normally with two dorsal spines between them. Median spines are scattered in adults, regular on young. The males have one lateral row each side, whereas the females have two. It typically weighs about 10lb but can reach up to as much as 20lb. They eat fish squid and crustaceans. Since 2009 it has been illegal to keep Undulate Rays fished in EU waters due to concerns over the decreasing size of stocks and must be returned unharmed if possible. This fish is suspended from ISFC list. The record stand at 18lb that was caught in Fenit back in 1977. 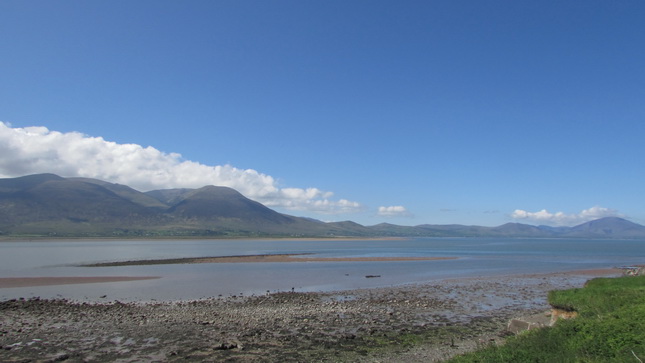 When I started fishing Fenit
It started about eight years ago when I was trying to catch sting rays with no luck and every time I stepped on to Fenit pier I would get talking to a some of the older Fenit residents, they would telling me a lot of story’s about back in the day when there was abundance of fish being landed by angling boats and lads that fish off the pier, some of them would show me some old photos of undulate ray, monk fish and a host of other large fish that were dead on the pier that most anglers now a days would make a deal with the devil to catch, me included. It true what they say you don’t miss it until it gone. As the price of fish went up greed overcame common scene and the mismanagement of the fish stocks turned Tralee bay into sporadic fishing venue. I believe that there should be a ban on netting Tralee bay to let the fish stocks recover, you don’t have to be a rocket scientist to know that this should have being done a long time ago before the stocks got to the critic low. I then believe what will happen is when the fish stocks get to a level that is worth burning fuel they will reopen it, if that happens it will prove that money is more important than the ocean ecosystem.

Fenit pier is a hot spot for rays but it is awkward to land them, a drop net is very handy

2014 Feint trip
The undulate ray had eluded me for all the years I fished Fenit until now because it is slowly making a comeback due to EU laws. It’s sad to think that Fenit was the most amazing fishing area for Undulate Ray, common skate, monk fish and a host of other fish species in the whole of Europe. It is a shadow of its former self but it is still worth a trip because if the fishing is slow the scenery is amazing. As the weather was good we believed it was time to head to Fenit for some of these amazing fish. With a two and a half hour drive over it was time to launch the boat, the slipway that we used is on the left just after the shop and before Fenit pier. This slipway is not designed for trailers that have skids, you will need a rope to get your boat off your trailer unless you want to back your vehicle up too it front axle. With the boat in the water it was time to head to the monk hole that is off Derrymore Island. As the tide was flooding we anchored on the edge of the drop off (west side) to let the scent of the mackerel travel down the length of the gully. After a few minutes my rod started to bend with a few clicks coming off the reel, I lifted the rod and the fish was on, what a start. As the fish came to the boat I was surprised that I was hooked into a small sting ray. Dan got the net around it to make sure that its tail could not slap around while it came on board. 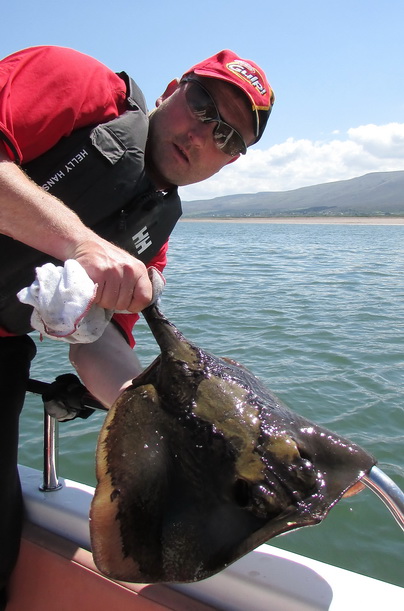 It did not take long before Dan’s rod was bent into a fish, it was fighting like mine stinger but as it neared the boat we could see it was our target fish a small undulate that took a large slice of mackerel. The tide was in full flood and we were getting lots of small fish hitting our baits, Dan decided to put out his second rod with smaller hooks baited with crab and mackerel to see what they were and within a few minutes he landed a nice plaice.

As the day pushed on and our GPS route set for the monk hole and a sand bar in the southern side of the bay we decided to head in for some thing to eat and get some sleep for the night session. With the alarm going off we had a hour half before it would be dark. As we were traveling across the bay we decided to give the sand bar a go first to see could we get some bass.

It was a good call out of Dan, we had seven bass that were all caught on crab and a Thornback ray and two undulate ray that were caught on mackerel.

We fish through the night until 4.30 am and headed back in for a few hours sleep so we could fish the next filling tide that was 10.30am. with our eyes open and the sun rising over the hills it was time to put on the kettle for a few strong cups of coffee to wake us up. We tossed a coin for where we were going to fish and the sand bar won. With the boat again at anchor and the tide on the fill the first fish was landed was my 6.5lb bass.

This 6.5lb Bass that took a large sand eel on a flowing trace, we landed two more around 4lb

As the tide started to build it was bringing in weed and we had to move and hope that we could get a few more hours before we had to go home. We decided to head back to the monk hole were we were the day before to see was the weed as bad and as luck was on our side it was quite clean. With everything in position my rod screamed off and then stopped, when I got my trace out of the water the hook was gone it must have been a Tope that bit through 40lb line. As I was putting the hook on my trace Dan was fighting a large fish that ran up tide and wrapped around the anchor, two nice fish lost, sick. With the rods baited and on the bottom we were hoping for another chance, it was about twenty minutes later that my rod bent into action It felt like a good undulate but as it neared the boat I could see it was a thornback ray my first from Fenit.

A few minutes after that thornback Dan was into a nice undulate it gave a good account of itself and After taking the photo we put it on the scales, it weight just under 11lb Dan’s new PB 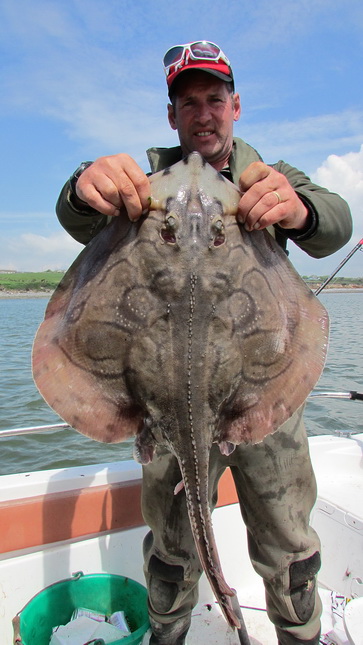 Dan with his new PB undulate ray, what a stunning looking fish

As we were using two rods a man one each with big baits and the other ones with small baits that kept us busy with dab and flounder in between the target fish. It was one of those days that the weather was so good it did not matter if we were catching but as we were it was becoming a day to remember. As it was nearing the time to call it a day Dan’s light rod started to bounce it was a nice flounder that took one of the few peelers that we brought with us.

As the flounder went back we decided to give it twenty minutes before we were going to call it a day. With that I reeled in my rods and re-baited them with large pieces of mackerel in the hope I could break my PB undulate that was only 6lb. And with some luck five minutes before time I was into a nice fighting fish on the light rod that had small hooks. As I was fighting the fish Dan reeled in all the other rods just in case I got caught up in them, then he got the net ready. As Dan netted the undulate I knew it was my new PB. We put it on the scales and it weighed 8lb 6oz, what a two day session.

With the fish put back we decided to keep the rods in and leave on a high note. I would like to get down next year for some of their darker cousins the sting rays.

1) The first tip is if you are fishing off a boat get a good fish finder and GPS.
2) Make shore there is plenty of light on the boat just in case you catch a sting ray because you need to get it tail under control that has poisons barb.
3) Take your time when driving around the bay especially at low water.
4) A 20lb to 30lb rod for down tiding and a good up tide rod so you can cast away from the boat.
5) Reels whatever type of rods you are using match a reel, any good tackle dealer will help you with that.
6) Pulley rigs for up tiding and a flowing trace on a running boom for down tiding all on a size 4/0 tide to 30lb to 40lb mono.
7) A good landing net.
8) Most important if you land an Undulate ray do the right thing and put it back because their numbers are at critical low